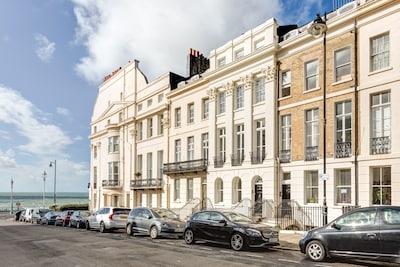 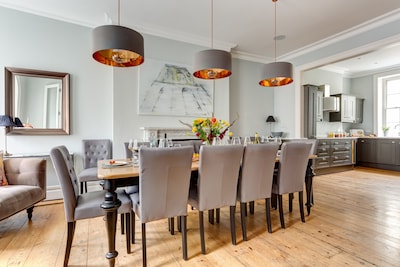 Luxury Mansion Townhouse with Private Cinema sleeping up to 18

Stunning 5 bedroom Regency house in the heart of vibrant Brighton

The Bedroom in the Basement

king
The Master Bedroom has a beautiful ensuite bathroom

All beds may be split into single beds. Two ottomans in master suite may be made up into singles.

Faye is your host and looks forward to welcoming you to 2 Portland Place, Brighton. Originally from London, Faye made Brighton her home in 1997 to enjoy the diversity and vibrancy of the ever-evolving open and friendly ‘London city by the sea'. She has a passion for period properties and creating comfort and beautiful aesthetics for her guests to enjoy. She loves to create the perfect guest experience.

Faye Phillips purchased this house in 2015

Until the summer of 2015, the Regency Society had nominated 2 Portland Place as one of the most at risk buildings in Brighton and Hove. With peeling paint and a crumbling facade, the house looked unloved and neglected – a fact that could not have been further from the truth. The previous owner, who had actually been born in the house, felt so strongly about it that he chose to take on the labour of love that restoring the building would entail. Sadly, after a decade of meticulous stripping back the project stalled when the sheer scale of the task became overwhelming and the house was put up for sale. It is rare to find a Regency townhouse that has not been converted in to flats and our dream was to continue the renovation in a manner and style befitting such a building and to return it to it's former glory. It's location in the heart of Kemptown village makes it the ideal base for exploring Brighton and it's surroundings or getting your friends and family together for a gathering to remember!

PRIVATE CINEMA HOME THEATRE The basement lounge also houses the private cinema home theatre system. At the touch of a button, the 2.5 meter-wide projector screen descends from the ceiling, the lights dim and change colour, as your chosen movie begins to play, brought alive by the 3D 4K high-end projector with immersive surround-sound Dolby Atmos 7.1 cinema sound system. STATE OF THE ART SMART HOME AUTOMATION SYSTEM 2 Portland Place, whilst being a 200 year old historic building, has been fitted with a state of the art smart home automation system, which controls the heating, lighting, security and entertainment systems, easily-operated via mobile iPhones, dedicated remote controllers, and fixed wall-mounted tablets, all provided for guests to use around the property. Many rooms are equipped with studio-quality ceiling loudspeakers that can play any audio or video from the in-house entertainment system or from any guest phone, tablet or computer. The speakers seamlessly blend into the interior decor to faithfully reproduce the sound of a concert hall or movie theatre. Each room's speakers can be set to play the same or different sources. For example, a movie can be screening in the cinema, while cooking and dining to your favourite music, as relaxing bath music plays in the master en-suite. Alternatively the same music can play in all rooms. With the included Apple Music subscription, you can enjoy losing yourself in 60 million songs, with unlimited streaming ad-free. You can sing along with displayed lyrics and listen live to radio stations around the world. Tap into new music or your favourites with curated playlists from Apple's editors. Ask Siri to search for songs, even by lyrics. The in-house security system allows that when visitors ring the doorbell, the fixed wall-mounted tablets and mobile iPhones provided for guests around the property communicate video and audio from the caller, allowing the opening of the door at the touch of a button.